Have you found a great catch but you’re not sure how to turn the guy you’re dating into your boyfriend? Do you go on a few dates only to be ghosted? Or even just flat out told “this just isn’t working out?”

You were getting along so well.

You had so much in common.

He was so cute and nice!

If this happens once or twice, that’s just the dating scene! But if you find this happens on a regular basis, there might be a few helpful tips that you can put in your back pocket.

Dating is a learned skill, most of us are not naturally good at it.

Dating involves a sense of “emotional intelligence” which forces us to look at the tiniest, most subtle behaviours in the other person.

We do this so that we can behave in a way that makes us look like a great catch, which is the opposite of looking needy, desperate, crazy etc.

But we can all learn some new behaviours that can help us improve and get the results we want. Which is a great boyfriend that loves us for the long-term.

These tips will make you an expert dater. No more getting ghosted by guys you like.

If you’re a video learner, feel free to check out the video, otherwise continue reading… 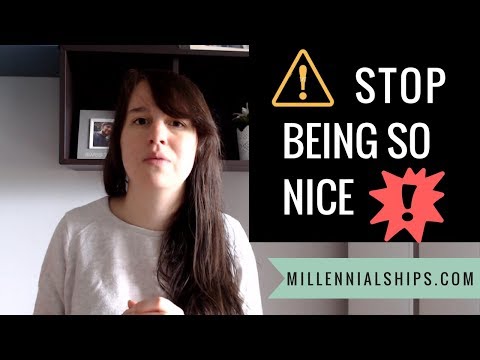 Simple Ways To Turn Him Into Your Boyfriend

Let him take the lead

In my post “The feminist guide to letting your boyfriend make the important decisions” I hammered home the point that society expects him to make the first move on most of the big decisions.

That’s why he knows it’s his job.

If he doesn’t ask you out, he might not get asked.

If he doesn’t follow up and say he had a great time, he might be turning you off.

He knows that he’s expected to do these things, so let him do them!

Let him ask you out. Let him initiate the text conversations or the phone calls. Let him follow up with you after the date and say how much fun he had.

He doesn’t have to take the lead forever, just until he’s your boyfriend. Until then, the words: “Hey, haven’t heard from you in a while” or “Hey did you still want to go out next week?” are NOT in your library.

Because if he isn’t asking you these things, it’s probably because he’s moved on. BUT if he was interested and you start asking him to go out with you on a last minute date tomorrow night, he might think you are a little too interested.

It will turn him off.

Take the pressure off of yourself and just let him take the lead on this one. In the meantime, you can be seeing other guys or checking your Tinder to see who else is out there. You are on Tinder Right?

Don’t Have Sex Right Away

There’s no perfect amount of time to wait before you have sex.  But there is a good rule of thumb and that’s not to have sex right away.

I think the bare minimum is 5 dates. So if you have gone out once or maybe twice a week, that means you should have been seeing each other for at least 3-4 weeks before you’re taking it to that level.

The longer you wait, the better chances you have to weed out the bad guys that are only interested in sex.

Guys who are only interested in sex don’t stick around if they’re not getting sex.

Relationships are all about giving and taking.

When we’re out in the dating world, the spotlight is on the guys we’re seeing.

“Oh he’s so cute and friendly”

We’re constantly judging him and analyzing whether or not he’s a great catch but have you taken a moment to determine if you are a great catch?

I mean of course you are…

There’s a reason why Dale Carnegie’s book was written decades and decades ago and is still popular today – because it’s true!

You need to show that you’re interested in him and that you are really nice.

He will like you back because he feels all of these things when he’s around you:

When you’re on a date with a guy, laugh at his jokes, compliment him, listen to his stories and ask questions about his life.

Then when you get home, you can decide if you actually liked him but you know there’s no doubt in your mind that he probably liked you – because you made him feel like the funniest, most awesome guy in the universe!

If the chemistry is way off and the guy downs 9 beers while you’ve only had 1 (true story), then maybe it’s just not working out and that’s fine.

But even if you’re not sure if you’re liking him. Just be nice and make him feel really good, then you can decide if you like him on your next date.

REACT TO HIS SOCIAL CUES (AKA DON’t BE TOO Nice)

Ok, I know I said you have to be nice, but there is a line!

Don’t worry, it’s not that confusing, there’s just a significant line that you don’t want to cross.

The easiest way to stay behind the line is by reacting to his social cues. This means that he makes a move first and then you react to it.

Imagine the two of you spent the night together and you wake up before him.

You decide to make breakfast, do the laundry and clean the bathroom all before he wakes up. You’re just being nice!

Why is it a problem?

People don’t act that nice around other people most of the time. If you are going out of your way to do these extreme things it means you’re desperate for love OR that you don’t understand acceptable social behaviour.

It’s weird to do that for someone you just met.

And even worse, it can tell him that he barely needs to put in any effort and he gets all of this in return.

I know that was an extreme example but women do extremely nice things like this for men all the time.

Then those same women are stuck in relationships with men that use them.

If you wake up in the morning and he starts making breakfast – offer to help. “Ooh those eggs, look good you’re such a great cook! Want me to make a fruit salad?”

You are reacting to his idea to make breakfast.

If he wakes up in the morning and says “Ugh this bathroom is a mess, here let me clean it” – Offer to wipe the sink while he does the rest.

The best part about this is that he will be realizing two things:

This allows you guys to move forward together in the relationship and one person is not investing more than the other.

You’re showing him that you’re the perfect amount of nice, without being desperate or needy. What a catch you are!

Turn up the feminine energy

I’m throwing this one in here because I struggled with this a lot when I was younger. I considered myself a strong woman.

I had a good career. I was financially Independent and I didn’t really need no man.

But I wanted someone by my side, as most of us do.

Now I’m a feminist just like you, I believe in equality for women in all aspects of life. You are strong and driven to be a successful business woman or CEO and that’s great, keep doing that.

But when we’re dating, we’re in the most primal of situations. Men want to chase and as women, we should let them chase us.

When you’re out there in the dating world, it’s good to tap into your feminine side and allow your man to feel like he is adding to your life.

You don’t have to act in a way that “isn’t you” but just accept that someone wants to take care of you and give you love and support. Realize that you don’t always need to be in control.

Are you navigating your way through the modern dating scene? Here are some posts you might find interesting:

I hope you found this article helpful, but it does you no good if the men you’re attracting are not high-quality.

If you’re interested in learning what High-Quality men look for in a woman, check out my Free Guide “How To Attract Higher Quality Men”.