We all know that healthy communication in marriage is important. Every relationship expert or marriage counsellor says that there is one thing that is so important in having a successful marriage and that is…communication! We’ve all heard it before and we know it’s true yet –

If he leaves his socks on the floor, you say “how many times do I have to tell you to put the dirty clothes in the hamper?” – You’re nagging.

If he says that he wants to stay home and watch football instead of going shopping, you say “why do you always have time for football but not for me?” – You’re guilt tripping.

If you’re clearly upset about something and he asks you what’s wrong and you say “It’s fine, whatever” – You’re being passive aggressive.

I think what the relationship experts failed to distinguish was that communication isn’t really what makes a successful marriage, it’s healthy communication. But what does that mean and how do I do it?

Video learners! Check out the video below, otherwise keep on reading. 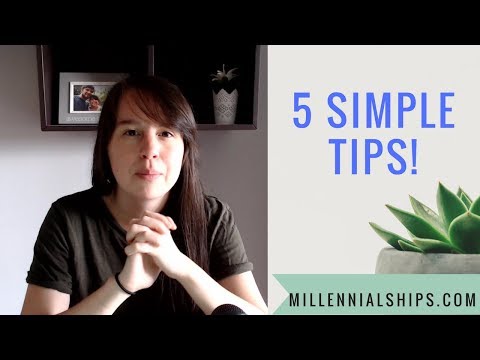 Doing this will completely transform your conflicts, disagreements and every day conversations.

If it is any of the above feelings, the conversation will go downhill. Those are not supportive and understanding emotions that are going to fuel a positive conversation.

Those negative emotions should never be the driving force in conversations with your partner. When you communicate with love, you put yourself in the mindset of support and positivity.

The catch is that those negative emotions are very real. It’s diffcult to have a loving and supporting conversation if you’re feeling frustrated or upset. I have outlined the “communicate with love” because that is the goal here. The problem is how do we acheive that goal? How can we take ourselves away from anger and towards love? That’s what the next steps are for…

Are you going to die?

One of my biggest pet peeves with my boyfriend is that he backseat drives me when we’re in the car. This is the worst and I hate it. Although I have mentioned a number of times how this annoys me, he still manages to slip out a comment here or there. In order to avoid a gigantic fight, I often ask myself ” am I going to die if he’s doing this?”

When the answer comes back as “no”, it’s a lot easier for me to calm down.

If you’re answering “no” in your case, then maybe this is a mole hill into a mountain situation. Is it worth fighting about? Is it worth nagging about? No.

These situations are better left un-mentioned, or saved until later when you’re not so heated about it. No need to fight about things that are so insignifcant they don’t really matter in the grand scheme of things.

Don’t risk a happy marriage over the laundry.

If you absolutely must bring it up, then do so but it should be in supportive and helpful way. Healthy communication in marriage should always be fuelled by love.

Don’t nag, guilt trip or manipulate. Communicate in a loving way by saying “Babe, you promised you would vacuum today, do you think you’ll have time to do that?”

Start a healthy conversation rather than starting a fight.

Healthy communication in marriage is not easy when our emotions get in the way. Sometimes they can get the best of us and we can’t help but yell or communicate our feelings in a destructive way. If you find that you are physically unable to communicate with love, then you are NOT ready to communicate.

Tell your partner that you need some time to yourself but you promise you’ll be ready to talk later.

Then go for a walk or take a breather and bring up the conversation in a calm and collective manner. This is what I like to call “using the silent treatment properly”.

See Through His Eyes

When we can’t understand why our partner is behaving in a certain way, it can’t be difficult for us to communicate with love.

“Why don’t you ever listen?” “Why aren’t you helping me with this?” “Why do you keep doing this when you know it makes me upset?”

When we love someone, we can feel empathy for them and their situation. This should be the case even when we are disagreeing with them or if they have done something to hurt us.

It’s important to try and figure out why he might be acting the way he’s acting. Did he cancel on dinner at your mom’s because he doesn’t like your mom? It’s possible that he was thinking about himself when he did something that hurt you but it’s rarely because he intentionally wanted to make you feel bad. It’s usually just a result of him wanting to do something for himself.

It doesn’t make it right. It doesn’t mean he can get away with doing that. It just allows you to see his side of things so that the two of you can start working things out.

Try to look at the situation from his side of things and it will help you decide how to tackle the situation. Maybe he had a long day at work and felt too tired to vacuum. Maybe he’s just not as good at folding the shirts as you are.

Be kind to him and kindness will be returned back to you.

Remember that you are a team

When you communicate in a destructive way, you are basically saying “it’s me against you”. This is the worst thing you can say to someone who is your team-mate in life. You guys are supposed to work together.

No, you would want to be his number 1 fan. His number 1 supporter so that you don’t end up fighting in the jungle on your own.

Healthy Communication In Marriage Is a Skill

The good news is that these communication skills is easy to implement with a little bit of practice. At the beginning it might seem tedious to say “Am I communicating with Love?” but eventually it becomes second nature and all of a sudden all your words are supportive, positive and helpful.

I remember there was a time when I was irrationally upset at my partner for asking me to get groceries when I had already done it a few times in a row. We usually alternate grocery shopping so that it’s fair.  I remember the nagging/negative words just lingering on my tongue ready to come out when I just stopped them from coming out. Instead I said “yeah sure, I’ll grab them this time and you can do it next time”. “Sounds good” he said back.

I really meant it when I said I would grab them and I wasn’t mad or resentful about it. “People buy food for people that they love” I thought to myself.  I had managed to turn a little tiny thing that should never be a fight into… not a fight. I couldn’t believe it! The method had worked – and it will work for you too.

Why haven’t you followed me on Pinterest? Thank you. You are nice ?