Do you want to be right or in love? That’s the age-old question. Often in a romantic relationship, we can be expressing a totally valid point and be 100% right but we end up saying it the wrong way. What you’re saying is important but the way you say it is even more important. Learn how to fight fair with these simple tips.

This blog is based on the Millennialships concept. Don’t know what it is? Find out here. 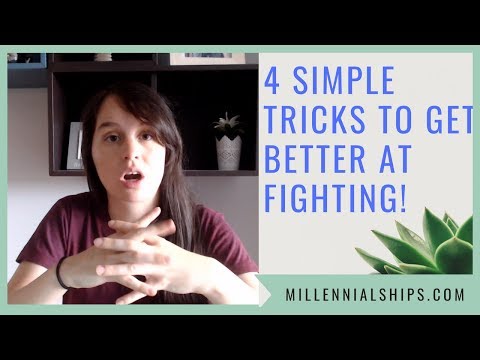 Always remember that the way you say things has a bigger impact on the person than what you say. This means that you need to formulate your sentences so that you’re expressing yourself in a way that causes the least damage on the other person.

For example. Let’s say you’re fighting with your partner because you were supposed to meet at the movies but he changed his mind and cancelled the date last minute. This left you by yourself at the theatre, literally all dressed up and nowhere to go.

You have every right to be angry about this situation. You are currently the angel with the halo around your head and he is the devil holding the pitchfork. If the two of you were to discuss this in a heated conversation, you would surely win the battle.

So you start the argument with an opening line that goes something like this:

“Oh so you fucking just leave me all by myself looking like an idiot and don’t even have the decency to give me more than half an hour notice that you’re bailing on me?”

The halo has been stripped away from you and now there are two devils in the situation, things are going downhill fast.

Now that is an extreme example but this kind of situation happens all the time. Instead of communicating your anger in a healthy and constructive way, you give in to your inner bitch and start attacking.

If you are super angry and can’t even think of a way to say how upset you are without pulling out the deepest insults, take some time to cool down. Use the silent treatment in a healthy way until you’re ready to communicate.

Using “I Statements” is a great way to help with your phrasing during an argument. GoodTherapy.Org reminds us of how important these can be for healthy relationship:

When used correctly, “I” statements can help foster positive communication in relationships and may help them become stronger, as sharing feelings and thoughts in an honest and open manner can help partners grow closer on an emotional level. –

Believe it or not, if you’re fighting with your partner in the right way, you should actually feel closer to them after the argument is over. It should increase your bond rather than tear it down.

So what is an I statement and how do we use it?

I statements mean that you tackle a problem by talking about your feelings rather than the other person’s actions. Let’s use the movie theatre example that we started above.

Rather than saying you “you stood me up” or “you didn’t give me enough notice”, change these statements to how you felt. Say things like:

I’m guessing your boyfriend loves you a lot and doesn’t want to hurt you on purpose. This means that when he hears you were upset or sad because of his actions, he’s going to want to fix it rather than try defending himself. This is why the I statement is so effective and works very well.

Psychology today reminds us that communication is mostly body language and tone of voice:

“The belief is that 55% of communication is body language, 38% is the tone of voice, and 7% is the actual words spoken.: – Pyschology Today

This is why it is so important to watch your tone of voice when you’re having an argument. If one person starts raising their voice, the other person will too and then things escalate.

Surprisingly, it’s really weird if one person is yelling and the other person is talking in a calm voice. So if you keep your voice calm (even if the other person starts raising his voice) then you’re more likely to keep the conversation from escalating into a flow blown fight.

I say “conversation” because that’s what this should be. Nothing should ever be a yelling match or a fight to see who can make the biggest scene.

Disagreements happen all the time and they are a normal part of sharing your life with another person. If you keep things in a conversational tone, you increase the chances that it’s going to be productive.

Talk About Your Emotions (Don’t Act On Them)

Let’s use “anger” for example.

If you act angry, you might stomp off and slam the door. Not healthy.

But if you say you’re angry ie. “I am really angry and upset right now, I don’t want to talk about this.” Then your partner can understand how you’re feeling and he can try his best to work together with you.

If your feelings are hurt, say they are hurt. If you don’t feel like talking, say that instead of ignoring him or hanging up the phone.

Don’t pull the turtle’s head out of his shell

Jamie Turndorf is a relationship counsellor and best-selling author. She discovered an interesting theory that she called “husband withdrawal.” She called it that because it’s a trait that is most often found in men but occasionally can be found in women as well.

The trait dates back to our cave man days where men would be the ones out in the wilderness, fighting the tigers. The way that they learned to deal with danger is a “fight or flight” response. Either they spear the tiger and kill it dead, or they run away and hide.

If you are “attacking” your man by yelling at him or forcing him to have a conversation that he doesn’t want to have, he’s going to see you as a “threat”.

His biological response to this is going to be fight or flight. So if he doesn’t decide to wack you across the head, it means he has chosen “flight” also known as “husband withdrawal.”

Signs of husband withdrawal include going silent, refusing to engage in the conversation or removing himself from the situation all together.

Think of a turtle putting his head inside his shell.

The problem here is that women often see this as him not listening so they try harder and harder to get his attention. This causes him to retreat even more.

Rather than leaving the turtle be for a few minutes, they stick their hand in there and try to pull his head out and force him to talk.

If you notice that your partner is withdrawing from the conversation, don’t force him to keep talking. Let him have his space but make him promise that you’ll pick it up later when you’ve calmed down. It’s not fair for him to just ignore you and not face the issue, but it’s also not fair for you to force him to finish something if he’s not feeling up to it.

Best to pick it up again when you’ve both calmed down.

Don’t hit where it hurts

Another way to describe this point is “fighting dirty.”

A dirty fight makes you feel like your soul is being attacked or like you’re attacking his soul. The words feel like they’re going deeper than just the topic at hand. One example of this is destructive phrases that attack the person. This includes phrases like:

“You always do this kind of thing to me.”

“I knew you would forget if I trusted you with that.”

A dirty fight also includes one partner belittling the other partner’s emotions. So if you say “It really hurt my feelings when you left me at the movie theatre alone” and he responds with “Oh come on, you’re making a big deal out of nothing.” That is him belittling your feelings and it is very hurtful.

Dirty fighting feels like it’s you against him. You are not working together to get out of this problem, you’re both out for yourselves and trying to take the other person down. Here is a list of some things involved in dirty fighting:

Healthy fights feel like a discussion or a debate. You know when you’re chatting with your friends about whether or not they like pineapple on a pizza? You both bring your points to the table and the conversation might even get a little heated, but at the end of the day no one is attacking each other.

No one is going trying to take the other person down, you’re just having a friendly argument.

This is what a healthy fight in a relationship feels like. It’s just two people talking about something that they don’t agree with.

A healthy fight feels like two people working together to try and solve a common problem.

One of the easiest ways to master how to fight fair is by staying on topic. Like I mentioned above, dirty fighting is when you start attacking the person rather than the problem. This is most easily avoided if you stay on topic and don’t bring up anything else.

That’s it! I hope you guys found this article on how to fight fair helpful and informative. Here are some related posts that you might find interesting:

Why haven’t you followed me on Pinterest? Thank you. You are nice ?